Skip to content
Since reaching its annual maximum extent on March 21, Arctic sea ice extent has declined somewhat unevenly, but has consistently been well below its average 1981 to 2010 extent. While the rate of Arctic-wide retreat was rapid through the first half … Continue reading →

Since reaching its annual maximum extent on March 21, Arctic sea ice extent has declined somewhat unevenly, but has consistently been well below its average 1981 to 2010 extent. While the rate of Arctic-wide retreat was rapid through the first half of April, it has subsequently slowed down. However, ice breakup was quite early in the Bering Sea, presenting difficulties for gold dredging operations and seal hunters in the region. In the Antarctic, sea ice continued to reach record high extents. 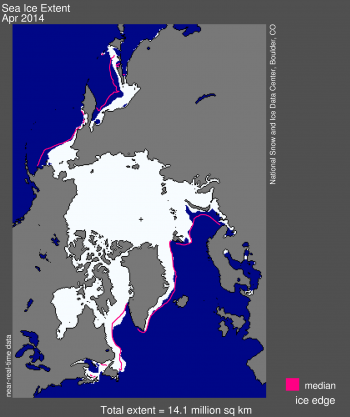 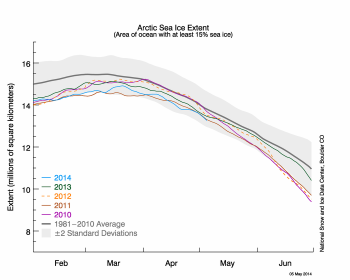 Air temperatures at the 925 hPa level (roughly 3,000 feet above the surface) were from 1 to 3 degrees Celsius (2 to 5 degrees Fahrenheit) above the 1981 to 2010 average over most of the Arctic Ocean, most notably over the East Siberian Sea and in the Bering Strait region. This contrasts with the region centered over Svalbard, where temperatures were up to about 2 degrees Celsius (4 degrees Fahrenheit) below average. The atmospheric circulation pattern as averaged over the month was somewhat unusual, featuring a large area of low sea level pressure centered over the Laptev and Barents seas. Pressures in this region were up to 16 hPa below the 1981 to 2010 average. The transport of warm air from the south along the eastern side of the low pressure area is consistent with the above average temperatures over the East Siberian Sea. The Arctic Oscillation (AO) was in its positive phase through the first three weeks of April, and then regressed to a modestly negative phase. 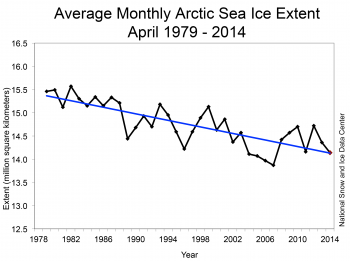 Average ice extent for April 2014 was the fifth lowest for the month in the satellite record. Through 2014, the linear rate of decline for April ice extent is -2.4% per decade relative to the 1981 to 2010 average.

Early breakup in the Bering Sea 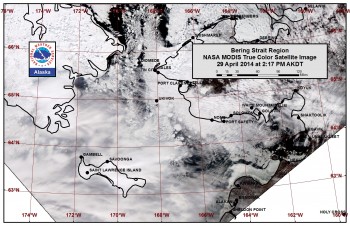 The anomalously low sea ice conditions in the Bering Sea are partially a result of low winter ice cover (see our March 3, 2014 post) and an unusually early breakup of sea ice. The Fairbanks Daily News Miner reported that the unusually early breakup of ice in the Bering Sea forced several gold dredging operations to act quickly to get their equipment off the coastal sea ice, which is used as a platform to work shallow seabed gold deposits. Seal hunters were also impacted by the early breakup, in some cases abandoning their snowmobiles on the ice as it became unstable or impassable. The snowmobiles were later recovered by boat. The SEARCH Sea Ice for Walrus Outlook provides weekly updates on sea ice conditions within the Bering Sea region for hunters, local communities and others interested in local ice conditions. 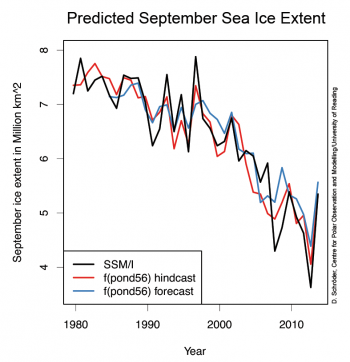 In spring, snow covers the sea ice on the Arctic Ocean and the albedo, or surface reflectivity, is high. As air temperatures increase, this snow begins to melt and collect on top of the sea ice. Dark melt ponds form, absorbing more energy from the sun than the adjacent bright snow and ice surfaces. A paper recently published in Nature Climate Change by Schröder et al. suggests that the fraction of melt ponds during May plays an important role in how much ice will be left at the end of the melt season in September. Melt ponds enhance the absorption of the sun’s energy by the sea ice pack, melting more snow and ice and further increasing the melt pond fraction. If melt ponds are widespread across the Arctic Ocean by mid-June and into July, under the 24-hour Arctic summer sunlight, then their effect is increased.

The size and number of melt ponds on sea ice are in part governed by the sea ice topography. First-year sea ice is smoother than multiyear ice, and the melt ponds tend to be shallower and more spread out over the first-year ice. While the melt pond fraction in May makes up about 1% of the total summer melt pond fraction, the shift to a predominantly first-year ice pack has helped to increase the number of melt ponds in spring and provides useful input into predictions for September sea ice extent. 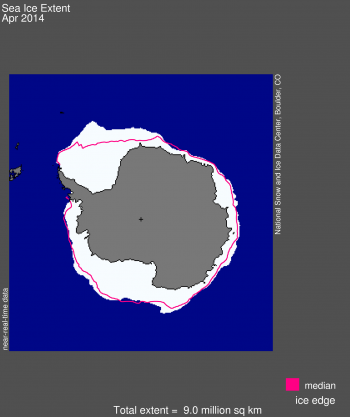 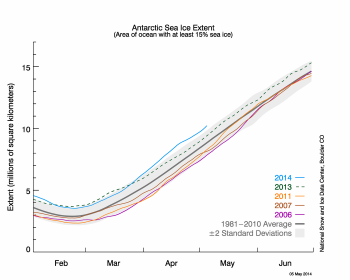 Following near-record levels in March, a slightly higher-than-average rate of increase led to a record April ice extent, compared to the satellite record since 1978. During April, ice extent increased by an average of 112,600 square kilometers (43,500 square miles) per day. Ice extent on April 30 was a record for that day; record levels continue to be set in early May.

Sea ice extent anomalies are highest in the eastern Weddell Sea (south of the South Atlantic Ocean near longitudes 45°W to 10°E) and along a long stretch of coastline south of Australia and the southeastern Indian Ocean (spanning 40°E to 170°E longitude). These areas of unusual ice extent are following similar anomalies seen in March. April also saw significant ice growth in the Bellingshausen and Amundsen Seas, one of the few regions with lower-than-average ice extents in March. Antarctic sea ice has now been significantly above the satellite average level for 16 consecutive months.