MISOMIP is conceived as a series of community exercises involving coupled ice sheet-ocean models, progressing from relatively idealized experiments to realistic experiments of the West Antarctic Ice Sheet (WAIS) region.  The first MISOMIP experiment, MISOMIP1, is in essence the combination of MISMIP+ and ISOMIP+ experiments.

MISOMIP1 prescribes that the ice sheet is initially in steady state with no melting, as in MISMIP+. Consistent with this, the initial conditions for the ocean model are cold enough to produce low melt rates (of order 0.2 m/yr on average). For the first 100 years of the simulation, the ocean’s temperature and salinity are restored in the far field to a warm profile consistent with Circumpolar Deep Water in the Amundsen Sea Embayment. This warm water is expected to be advected into the ice-shelf cavity within less than a decade, at which point it induces strong melting and subsequent rapid ice retreat. After 100 years, the far-field restoring in the ocean model is abruptly switched to a colder profile at the surface freezing temperature. This will shut off melting over the subsequent decade and allow ice to re-advance for the next 100 years.

A complete description of the experiments will be published in an article in Geoscientific Model Development, to be submitted in July, 2015. 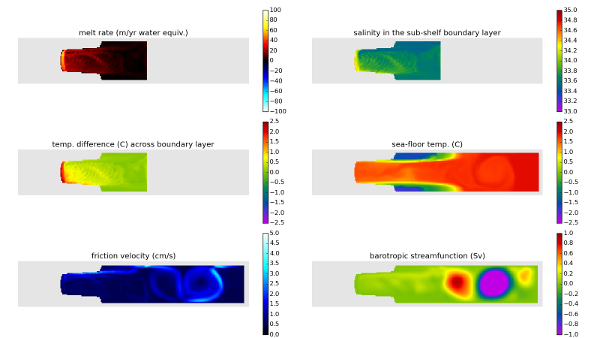