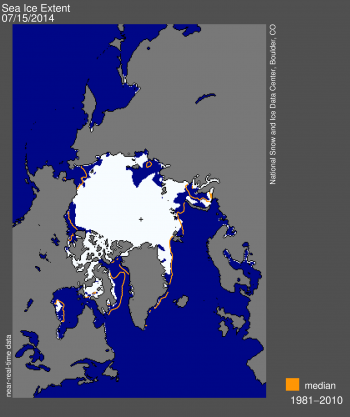 During the second half of June, the rate of sea ice loss in the Arctic was the second fastest in the satellite data record. As a result, by the beginning of July extent fell very close to two standard deviations below the long-term (1981 to 2010) average.

The rate of ice loss for the first half of July averaged 104,000 square kilometers (40,000 square miles) per day, 21% faster than the long-term average for this period.

Ice loss during the first two weeks of July 2014 was dominated by retreat within the Laptev Sea, and within the Kara and Beaufort seas. Open water areas now exist north of 80 degrees North in the Laptev Sea. Ice cover remains fairly extensive in the Beaufort and Kara seas compared to recent summers. 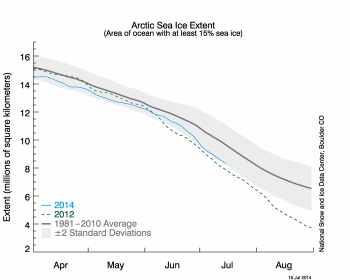 Figure 2. The graph above shows Arctic sea ice extent as of July 15, 2014, along with daily ice extent data for 2012, the record low year. The gray area around the average line shows the two standard deviation range of the data. Sea Ice Index data.

The first half of July 2014 was dominated by anomalously high sea level pressure over the Arctic Ocean and the Barents Sea, coupled with below-average sea level pressure over Iceland. Air temperatures at the 925 millibar level (or about 2,500 feet above the surface) were mostly 1 to 3 degrees Celsius (2 to 5 degrees Fahrenheit) above average over parts of the Arctic Ocean, leading to surface melting. Air temperatures were 1 to 3 degrees Celsius (2 to 5 degrees Fahrenheit) below average in the Kara and Barents seas, where melt has generally been off to a slower start than average this summer. Ice extent remains below average in the Laptev and East Greenland seas and Baffin Bay, and is near average to locally below average in the Beaufort, Chukchi and Kara seas. 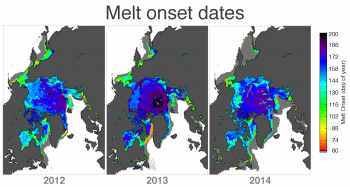 Figure 3a. These images show melt onset dates in the Arctic for 2012, 2013, and 2014 based on the Japan Aerospace Exploration Agency (JAXA) AMSR-2 sensor. Dates are expressed as the day of the year. Areas in light gray are regions where the ice conditions could not permit melt onset detection, or where the melt onset dates are less than day 75. Note that the data for 2014 are preliminary. 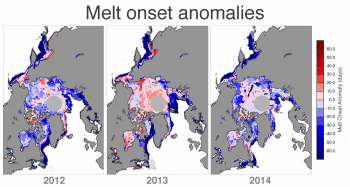 Figure 3b. These images show melt onset anomalies in the Arctic for 2012, 2013, and 2014. Reds indicate areas where melt began later than average and blues indicate melt beginning earlier than average. Since anomalies are computed relative to the 1979 to 2014 long-term average, there is a larger area masked out area around the pole to compensate for the large pole hole during the period of coverage from the Scanning Multichannel Microwave Radiometer (SMMR). Note that the data for 2014 are preliminary.

In general there has been a trend over the satellite data record towards earlier melt onset in the Arctic. Melt usually now begins an average of 7 days earlier than in the late 1970s and early 1980s, or at a rate of about 2 days earlier per decade. However, in regions such as the Kara and Barents seas, melt has begun on average 5 to 7 days per decade earlier, totaling 18 to 25 days earlier since 1979, helping to foster earlier development of open water in those regions.

Despite statistically significant trends towards earlier melt onset, there remains a lot of year-to-year variability. For example, in 2013, melt was slow to start, particularly over the Arctic Ocean, the Laptev and East Siberian seas, Hudson Bay, and the Bering Sea. By contrast, melt onset in 2012 was generally earlier than average over most of the Arctic Ocean, including the Beaufort, Chukchi, Laptev, and Kara seas, as well as Hudson Bay and Baffin Bay, and later than normal in the East Siberian Sea, the Greenland and Bering seas. While melt began earlier than average this summer in the Beaufort, Chukchi, Bering, and Laptev seas, it has been somewhat slower to start in the East Siberian Sea and in the Kara Sea, as well as in large parts of the central Arctic Ocean.

For June, sea ice concentration and extent were higher than average for the Amundsen, Southern Indian Ocean, and far southern Atlantic (Weddell and eastward) sectors. (See Antarctic reference map.) The regions on either side of the Antarctic Peninsula were among the few sections with lower-than-average concentration and lower sea ice extent. Cooler-than-average ocean conditions are present near the ice edge along the Wilkes Land, Amundsen Sea, and Weddell Sea ice edge, which will favor continued expansion of sea ice in these areas. 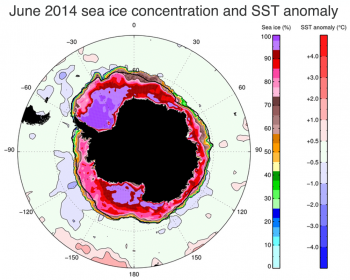 Antarctic sea ice extent also shows a small, long-term upward trend over the period of satellite observations. Antarctica and the Southern Ocean are geographically very different from the Arctic, and are governed by different atmospheric and ocean circulation patterns. Nevertheless, Antarctica has experienced many of the same general signals of Earth’s changing climate as in the Arctic, including general warming, ice sheet loss and faster-flowing glaciers. This makes the small, long-term upward trend in Antarctic sea ice extent rather puzzling. The record sea ice maxima over the past two years (relative to the modern satellite era) have added to the puzzle.

Two recent studies, focused on the back-to-back satellite-era record maxima of 2012 and 2013 (Turner et al., 2013; Reid et al., 2014 in press), point to unusual short-term wind patterns that both fostered ice growth and spread the ice out. In both years, the record-setting extents are related to the size and strength of the Amundsen Sea low pressure area late in the growth season. The more recent study also notes cool ocean water (1 to 2 degrees Celsius or 2 to 4 degrees Fahrenheit below average) persisting near the sea ice edge in the Amundsen-Bellingshausen region in July and August 2013.

Leading ideas regarding the long-term upward trend as assessed over the thirty-five-year satellite record are: (1) persistent changes in wind patterns, resulting from increased westerly winds, which have changed both how much ice is formed and how it is moved around after formation (Holland and Kwok, 2012); and (2) that meltwater from the underside of deep floating ice shelves surrounding the continent (greater than 350 meters, or 1,150 feet thick) has risen to the surface and contributed to a slight freshening of the surface ocean layer (Bintanja et al., 2012). The extra melting results from the changing wind patterns, which act to draw deep warm ocean water inward to the continent to replace surface water and sea ice that is pushed outward and eastward by the stronger westerlies. By thickening, spreading, and stabilizing the polar surface ocean layer (which is comprised of cool, near-freezing water) the increased melt from the ice sheet edges helps sea ice grow around the Antarctic continent. 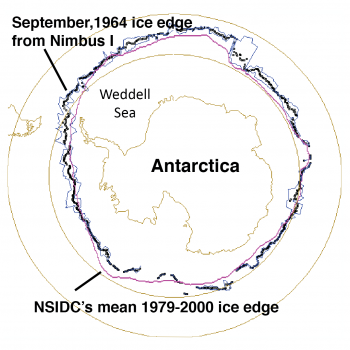 Figure 7. This map of the Antarctic ice edge for September 1964 from the Nimbus I satellite shows greater ice extent than the modern satellite period (1979 to 2014). A similar mapping of the August 1966 sea ice extent showed lower ice extent than modern data have shown for that month. The figure is modified from Gallaher et al., 2014.

Antarctica’s sea ice extent has also been highly variable. For example, austral summer minimum ice extents have varied by as much as 25% over the 1979 to 2014 modern satellite record. The June 1979 extent was the highest for a month by a significant margin. Then in 2002, June sea ice extent was the lowest ever recorded. Nine years later, in June 2011, extent tracked below the 1981 to 2010 average.

This variability is underscored by recent assessments of very early satellite images from the Nimbus program of the late 1960s (Gallaher et al., 2014). Mapping of the September 1964 ice edge (at the austral winter sea ice maximum) indicates that 1964 likely exceeded both the 2012 and 2013 record monthly-average maximums, at 19.7±0.3 million square kilometers (7.60±0.11 million square miles). This was followed in August 1966 by an extent estimated at 15.9±0.3 million kilometers (6.13±0.11 million square miles), considerably smaller than the record low August monthly extent set in 1986. It hence appears that Antarctica’s sea ice variability may be greater than the 35-year modern satellite record would indicate, and that the current growth trend, while important, is not yet reaching unprecedented levels seen within the past century.