Skip to content
Arctic sea ice extent continues its seasonal decline. Through most of June the pace of decline was near average, but increased towards the end of the month. Overview of conditions June 2014 averaged 11.31 million square kilometers (4.37 million square … Continue reading →

Arctic sea ice extent continues its seasonal decline. Through most of June the pace of decline was near average, but increased towards the end of the month. 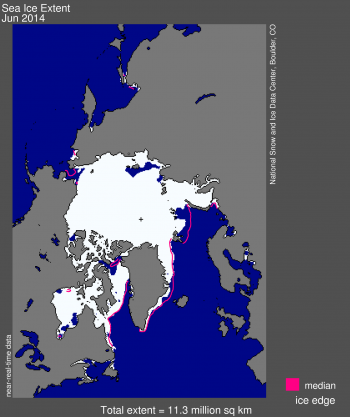 Large areas of open water quickly opened up in the Laptev Sea at the beginning of June and continued to expand through the month. The southern part of the Beaufort Sea has also opened and melt ponds are apparent on the open drift first-year ice and extending into the pack ice (see Figure 5 below). Nevertheless, ice extent in this region continued to be above the levels of recent years through much of the month. Extent was lower than average in the Barents Sea, Hudson Bay, and the East Greenland Sea, but higher than in recent years in the Kara Sea. 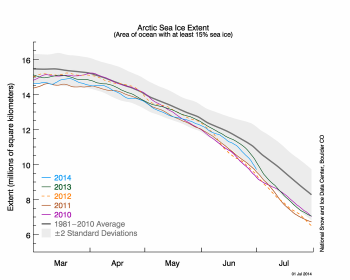 Ice extent during June declined by an average of 78,900 square kilometers (30,500 square miles) per day, faster than the 1981 to 2010 average June rate of 57,200 square kilometers (22,100 square miles) per day. Last March’s relatively low maximum extent helped set the stage for June’s low extent. June is a month that has seen large variability in the rate of ice loss in recent years. In 2012, a period of rapid acceleration occurred during the first half of the month, kick-starting the decline towards the eventual record low extent that September. So far, 2014 has failed to match the 2012 loss rates. However, ice extent on June 30th came within 300,000 square kilometers (115,800 square miles) of that in 2012. The 2014 rate of ice decline also accelerated toward the end of June as wide areas of low-concentration ice on the peripherial areas of the Arctic Ocean opened up, especially in the Hudson and Baffin bays. This increased rate of loss is typical of late June and early July, and is visible in the 30-year mean trend for Arctic sea ice (see the ChArctic interactive sea ice chart). 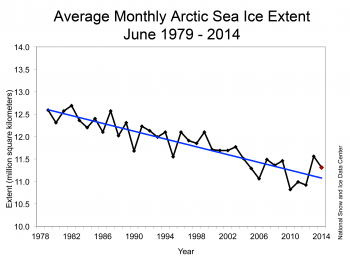 The cool conditions in June 2013 were attributed to a generally cyclonic pattern of atmospheric circulation. However, by late June 2014 the more typical pattern of high pressure over the Beaufort Sea had developed, coupled with low pressure over Alaska and Eurasia. 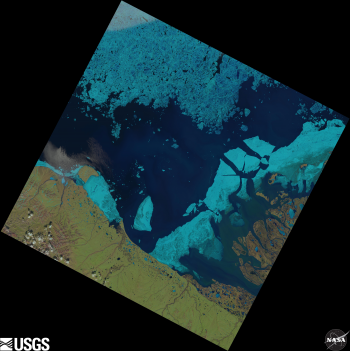 Figure 5. This Landsat 8 image of the Beaufort Sea and MacKenzie River Delta was acquired on June 16 , 2014. The approximately true-color image shows abundant surface melt and melt ponds, fast ice break up, and coastal features of the springtime Arctic. The image is 185 kilometers (115 miles) on each side.

Landsat 8, launched in February of 2013, has been regularly acquiring images of the world’s daylit land surface since May of that year. The mission recently increased the pace of image acquisition, covering nearly all available daylit areas each day, and expanded coverage of sea ice areas in the Arctic and coastal areas of Greenland (the latter with ascending node, or evening hour, coverage). Coverage for the Arctic Ocean is focused on the far western and far eastern Arctic, that is, the Beaufort, Chukchi, and East Siberian Sea, although substantial coverage of sea ice is included in the acquisition of all Arctic land areas. Ascending (evening) and decending (morning, the typical acquisition time) coverage of coastal Greenland permits better tracking of glacier flow and in particular sea ice break-up and glacier retreat in the fjord areas. 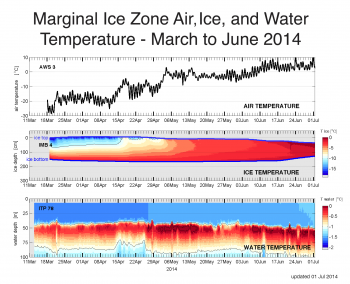 As noted in last month’s post, satellite and airborne sensors are now able to provide good coverage of the Arctic ice thickness. However, as with any remote sensing estimate, the observations come with uncertainty. Direct measurements, even though they do not provide wide-coverage, are important for validation. They can also provide a useful indication of general ice conditions (thickness, temperature) at the beginning of the ice season. Such direct observations, in concert with available satellite and airborne data, can improve seasonal forecasts of sea ice, such as those provided in the recently released Sea Ice Outlook.

In March, the U.S. Navy’s Office of Naval Research (ONR) Marginal Ice Zone project deployed three clusters of mass balance buoys on the sea ice, complementing ongoing similar deployments by the U.S. Army Cold Regions Research and Engineering Laboratory. These mass balance buoys not only provide a simple thickness measurement, but can also provide a time series of the evolution of the ice, both at the top and bottom surface. The ONR buoys additionally include air temperatures sensors, which are useful for monitoring atmospheric conditions, as well as temperatures through and below the ice.

The Beaufort Sea has been a region of dramatic summer ice loss in recent years, particularly 2012, with regions dominated by thicker, multi-year ice melting out completely. While vigorous melt has begun, it remains to be seen how the ice cover will evolve over the rest of the melt season.