Skip to content
The Arctic summer of 2014 is nearing an end. Overall, the rate of ice loss during August was near average. Regions of low concentration ice remain in the Beaufort and East Siberian seas that may yet melt out or compress … Continue reading →

The Arctic summer of 2014 is nearing an end. Overall, the rate of ice loss during August was near average. Regions of low concentration ice remain in the Beaufort and East Siberian seas that may yet melt out or compress by wind action. While the Northwest Passage continues to be clogged with ice and is unlikely to open, the Northern Sea Route along the Siberian coasts appears open except for some ice around Severnaya Zemlya. As the end of the southern winter draws closer, Antarctic sea ice extent remains higher than average. 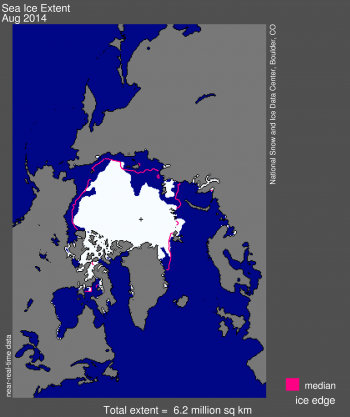 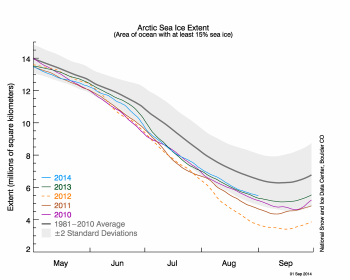 August ice extent declined at an average rate of 54,300 square kilometers (21,000 square miles) per day. This was slightly less than the average rate for the month. Generally, the decline slows in August as the Arctic sun dips lower in the sky. Recent years have been an exception, with relatively fast ice loss rates in August. 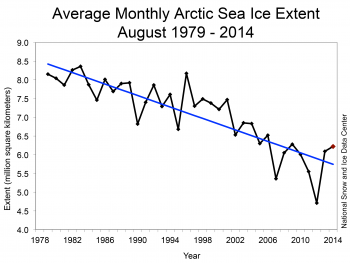 The Northwest Passage: closed for business 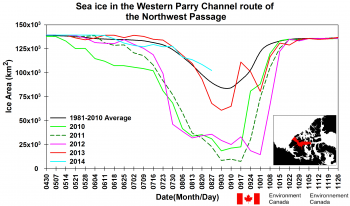 Figure 4. This time series shows the total sea ice area for selected years within the Western Parry Channel route of the Northwest Passage. The cyan line shows 2014, and other colors show ice conditions in different years.

Several recent years have seen remarkably open conditions in the Northwest Passage by the end of August. This year, however, much of the passage is clogged with ice, and even the circuitous Amundsen route is not entirely open. (Note that Amundsen required two summers to navigate this route in 1905; Amundsen wintered over in the hamlet of Gjoa Haven—now called Uqsuqtuuq).

The recent openings of the Northwest Passage in 2007, 2008, 2010, and 2011 were associated with high sea level pressure anomalies over the Beaufort Sea and Canadian Basin. This atmospheric pattern essentially displaces the polar pack away from the M’Clure Strait, resulting in minimal ice inflow from the Arctic Ocean. In contrast, weather patterns this year have been more moderate, and as a result, more ice remains in the Northwest Passage. As of the end of August 2014, ice area in the passage was tracking above the 1981 to 2010 average. Ice area over the summer of 2013 tracked slightly below the 1981 to 2010 average, but was considerably higher than the years prior. The summer of 2011 saw the lowest ice area in the Northwest Passage since 1968.

On the other side of the Arctic Ocean, conditions are much more open along the Northeast Passage (also known as the Northern Sea Route). There are wide areas of open water along much of the Russian Arctic coast, the lone exception being the area around Severnaya Zemlya.